In honor of Autism Awareness Month, we’re featuring some of our favorite Autism temporary tattoos! These tattoos are perfect for Autism walks, fundraising events, or anytime to spread awareness and show support. Check out our selection below, or click here to shop the full selection of Autism Temporary Tattoos. 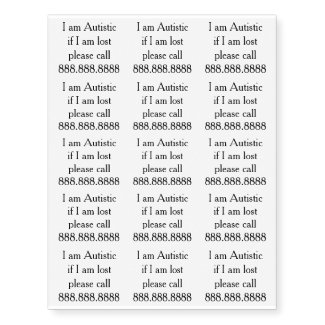 The Autism Lost and Found Temporary Tattoo is an important safety tool for children with Autism who may tend to wander. This design can be personalized with your phone number in case you get separated from your child. These tattoos can also be edited with any text, so they can be used for anyone on a school field trip, family vacation or other event. 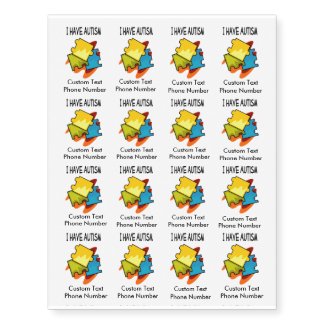 I Have Autism Medical Alert Tattoo

The Autism Medical Alert Tattoo below can be helpful for autistic youth or adults. These are perfect for trips or other situations where you may want a cell number or other contact information listed, like a temporary hotel or other residence. 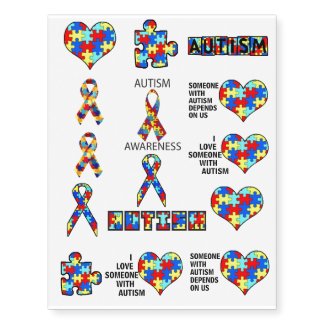 Colorful puzzle designs on Autism Awareness Ribbons, hearts, puzzle pieces, and sayings such as “I love someone with Autism” 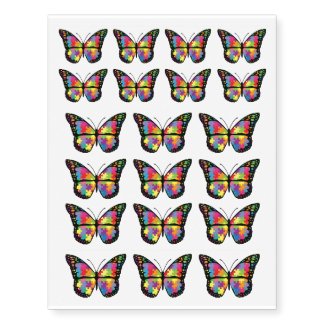 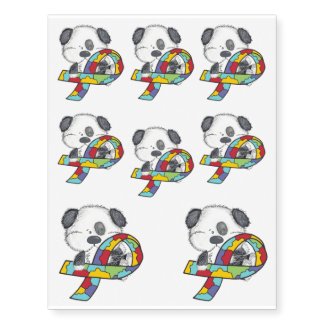 HAPPY SPRING! The weather is continually getting better, baseball season is here and the community parks are filling up with kids anxious to release their pent up winter energy! April is also Autism awareness month! I would like to take some time to present some information to those who don’t know exactly how many people and families Autism affects.

There really isn’t one known single cause of Autism, but scans of the brain will show differences in shape and structure, so it is generally accepted that it is a brain abnormality, as well as a genetic disorder.

According to the Autism society, the ratio of Autism spectrum disorder births are 1 in 88, with 1 to 1.5 million Americans living with Autism. It is also the fastest-growing developmental disability, with a 1,148% growth rate (Growing 10 to 17 percent annually). The cost of care alone is startling, with an average cost of $3.2 Million per person, with 60% of those costs coming from Adult care services. The overall amount of lifetime care cost could be reduced by 2/3 with an early diagnosis.

It is also estimated that the annual cost to educate a child with Autism is over $18,000. That ‘s nearly three times more than the “regular” education student! And, unfortunately, only 56% of Autistic Students graduate high school.

Though some of us may not be affected by the challenges that autism presents, we can all still help out those who are. By going to the store on this site, you can purchase many items bringing forward awareness of Autism, like Shirts, Coffee Mugs, Hats, Buttons in a plethora of styles! Here are a few of our favorite Autism Awareness Gifts:

Autism: A Story of Great Worry and Great Love 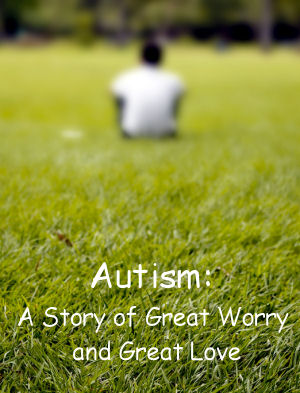 In honor of Autism Awareness Month, we’d like to share a story about a very special friend. The story was written by his aunt…

I’ve realized over the years that there are a lot of people who don’t know anything about Autism, other than what they’ve seen from the movie “Rain man”. Autism has many variations and each autistic person is unique, like a snowflake, most of them are nothing like Dustin Hoffman’s character. I thought i’d tell you a little bit about my own experience with Autism.

I have an Autistic nephew. We knew something wasn’t right shortly after he was born. He was 6 months old before he was able to hold his own head up and he didn’t crawl until he was about a year and a half old but boy could he talk! My sister and I often babysat him and were amazed at how quickly his speech was developing despite his physical delays. We loved showing off how smart he was by pointing to things and having him name everything. He even associated each of us with the car we drove by saying our names and pointing to matchbox cars that were the same color.

All of a sudden that changed. He was becoming hesitant to talk and wouldn’t say anything when prompted. We thought he was just getting shy around strangers, as many 2 year olds do. His mother took him to several specialists and each time they said it was probably Autism. Autism? No way, we thought, he’s social and loves hugs and kisses. Autistic people hate to be touched and don’t smile at you! We were in denial but slowly it became clear that this was Autism. It was just not what we thought autism was.

I see him struggle to communicate with those around him because he lost most of the ability to speak at 2 years old and has regained very little of it. I watch people stare at him because they think his clapping and stomping is the result of a lack of discipline. They don’t understand that it is something he does to soothe his anxiety. He doesn’t know how to calm himself down otherwise. When people he’s never met before say hi to him, he just looks at them out of the corner of his eye with a blank expression on his face.

He’s now 10 years old, yet he can’t do a lot of the physical activities that other kids his age can do. He has hypotonia, or low muscle tone, something that is very common in autistic children. His hypotonia makes him clumsy. The muscles in his limbs don’t have enough tension to support some of his movements. His sense of pain is dulled considerably. His baby sister used to bite him on the arm so hard that it left big purple bruises. His mother didn’t know what was causing the bruises until she witnessed the toddler biting him. He just sat there not responding. A normal child would scream in pain and move away from the source. His brain doesn’t interpret the biting as pain. The lack of sensation to pain and the low muscle tone mean that he could seriously injure himself and not even know it.

I worry about what his adult years will look like. Will he be able to hold down a job? Will he be able to live on his own someday? What will happen to him if our family doesn’t have the financial means to take care of him, especially as we age ourselves? Will he ever be able to read a book? Will he ever again be able to tell us verbally what he’s thinking? Will he be able to stop someone from hurting him? It breaks my heart that the answer to most of these questions is probably no. That’s not true for every Autistic, but it’s the likely story here.

I look at him in awe because he is fascinated by things most of us wouldn’t give a second thought to. My heart melts when I see his face light up with sincere love for those he has grown to trust. And it makes me laugh when I see him interact with someone he clearly doesn’t! His BS meter is well oiled and fine tuned, even if some of his other skills aren’t. There is no fooling him. His laugh is joyful and infectious when you tickle him. He’ll say “more!” (one of the few words he still uses) when you stop. He loves to sit at the kitchen table with his Aunts and just watch and listen to them talk. He can’t join in on the conversation much but it’s very apparent he understands what we’re saying and wants to be a part of it. His sisters adore him and it’s clear that he is equally fond of them. They are much younger than him but they understand that he is a delicate little soul that needs extra love and protection. I worry about him so much but I don’t doubt that he will affect those who enter his life in a positive way. I feel very lucky that the autistic in my life is one who can show and accept love. There are many who can’t. It’s a wonderful feeling knowing that he can.

Autism is difficult to understand and there are daily battles that are both frustrating and baffling but it’s not a death sentence. It’s not something to be embarrassed by. Do I wish we understood the cause? Do I want there to be a cure? YES! But I don’t wish that my nephew was any different than he is. He is a unique, perceptive & lovable child and I am so happy that he is a part of my family. He is a daily reminder that we are not all the same and that we need to be more tolerant & accepting of each other.

Here’s a few of our favorite Autism Awareness t-shirts shown below:

Autism Ribbon Hero in My Life My Sister

Autism Ignorance is the Tragedy T-shirt